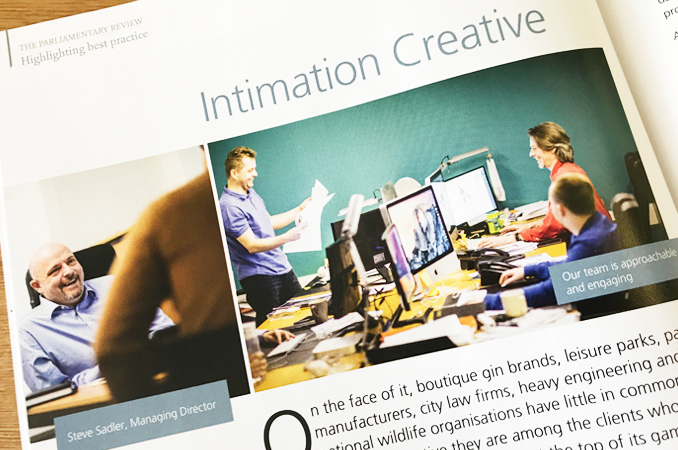 Intimation appears alongside Prime Minister Theresa May in the 2016/17 Parliamentary Review.

Established by former minister The Rt Hon David Curry in 2010, The Parliamentary Review’s September release is now a key fixture in the political calendar.

Intimation features alongside the Prime Minister and a small number of outstanding organisations in a document that looks back on the year in industry and Westminster. The main aim of the Review is to showcase best practice as a learning tool to the public and private sector.

Across all policy areas, The Parliamentary Review is sent to over half a million leading policymakers. The articles in the Review act as both a blueprint for success and a template for reform.

The Prime Minister commented that ‘this year’s Parliamentary Review follows a significant year in British politics’ and this is reflected in the articles from leading journalists and best-practice representatives alike.

The PM’s former cabinet colleague, Sir Eric Pickles, who was recently appointed Chairman of the Review, said ‘it has never been more important for government to hear the views of business and the public sector in a constructive forum. It is also a vital time to share best practice and progress.’

The Parliamentary Review’s director Daniel Yossman concurred, saying ‘Intimation and other hardworking organisations from across the country have come together to make this year’s Review possible.

Sharing knowledge and insight with both peers and government is essential work and I am delighted that this year’s Review will reach every corner of the British economy.

It’s always a real joy to hear from policymakers who tell me that something they have read in the Review has had an effect on their thinking.

It is my belief that innovation is contagious, if only it is given the platform to spread. It is the Review’s purpose to provide this platform and I am confident we are fulfilling it.’

An e-copy of The Parliamentary Review can be viewed here: